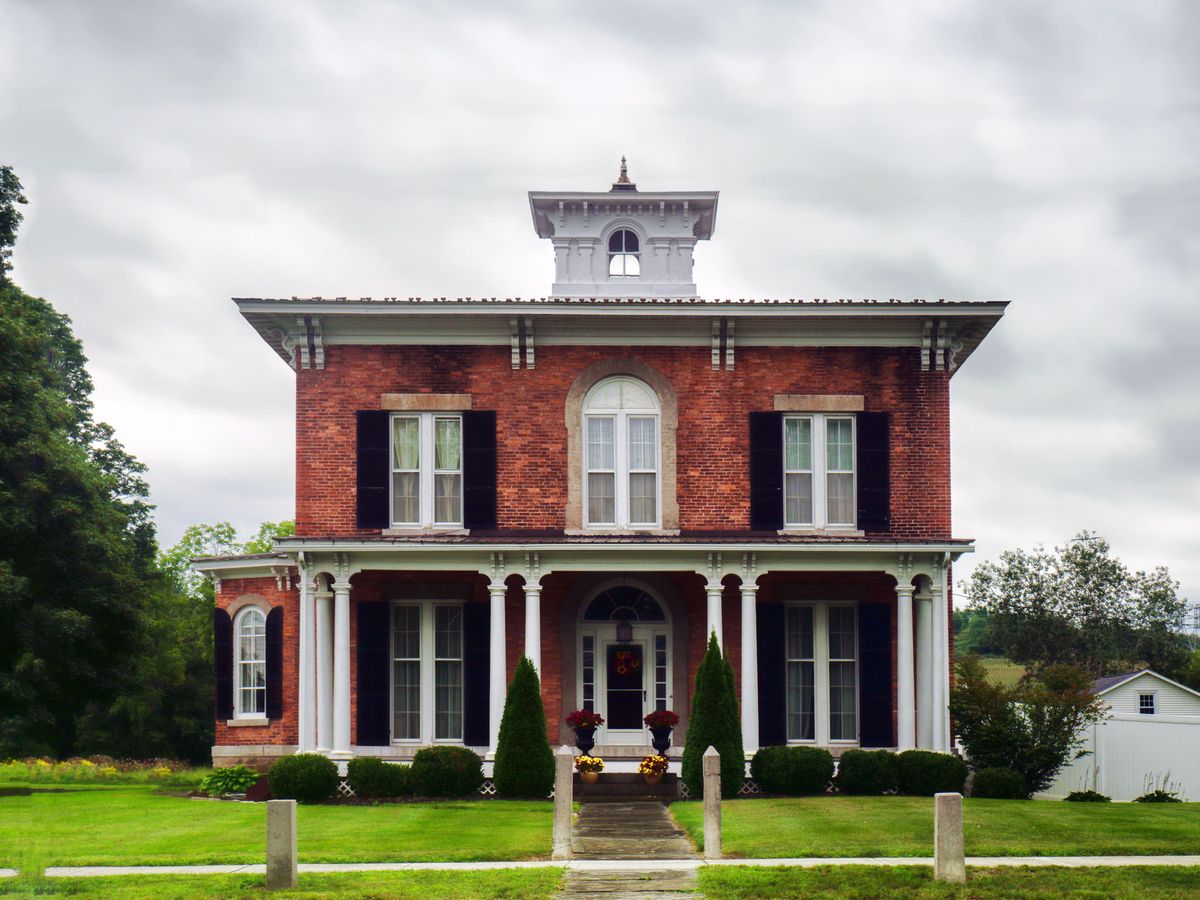 Designed as homes for working-class and middle-class families, American Foursquare homes can be found throughout the United States. Although there are regional variations, they generally feature wide porches and well-proportioned rooms with multiple bedrooms, and are often located in the suburbs.

If the idea of ​​living in a Foursquare appeals to you, you’re in good company since Bill Clinton, Diana Ross and Ernest Hemingway all grew up in a Foursquare.

Below we take a look at the design features of this most American style of home.

What is an American Foursquare?

A Foursquare is a two-story, cube-shaped detached house characterized by a full- or half-width porch, hipped roof, double-hung wooden windows, and dormers in the attic.

The overall footprint and individual rooms are square, giving the house its name, although it is sometimes known as the Prairie Box. The cubic shape makes the most of every inch of space.

When were Foursquare homes built?

“The American Foursquare is a style of home that was popular in the late 19th century and early 20th century – from the mid-1890s to around the 1930s,” says Christina Dikas, Associate Director, Planning Studio Director cultural resources. , Senior Architectural Historian at a Historic Preservation and Architectural Firm Page and Turnbull (opens in a new tab).

“It was influenced by the earlier Queen Anne style and neo-classical style, and had commonalities with contemporary Prairie School and Craftsman bungalows. As an example of this range of influences, porch posts on Foursquares can be classic columns like the Classic Revival style, tapered square posts in the Craftsman style, or just simple square posts.

Where are Foursquare homes located in the United States?

American Foursquare homes have been built all over the United States. According to Christina, this is partly because they were widely available as kits.

“Similar to Craftsman bungalows, compact and relatively simple designs were sold as kit homes through mail-order catalogs like Sears-Roebuck and Aladdin,” she says. “The era when they were popular coincided with the development of tram suburbs, so the houses are in these types of neighborhoods just beyond the city centers. However, they are also found in more rural settings.

What materials were they constructed from and are there regional variations?

“American Foursquare homes are typically wood or brick, and wood-frame homes may have stucco,” says Christina. “Rare are the Foursquares built of concrete blocks.

“The materiality partly depends on the region in which the houses were built. For example, brick homes are generally more common in the Eastern, Southern, and Midwestern states than in the West, where wood was the predominant building material. Some include enclosed rear veranda additions or enclosed front porches, more common in areas with colder winters and snow.

There are many beautiful Foursquare homes down south. “They usually have big rooms, big picture windows, and of course the epitome of southern living, a porch that spans the entire front of the house,” says Kareena Gray, director of operations at the office. Charlotte Renovation and Custom. build a business Alair Houses (opens in a new tab). “In Charlotte, we are fortunate to have many neighborhoods that boast this style and the Foursquares in those neighborhoods are awe-inspiring.”

Why are Foursquare homes so popular today?

“They represent a classic American architectural idiom, including their individual single-family form and the expediency of porch culture,” Christina explains.

“They’re often located in quaint early 20th-century neighborhoods with tree-lined streets. For people who work in urban areas, their location in the tram suburbs allows them easy access to work and other amenities.

How to modernize Foursquares without losing its character and charm?

“Like most homes of this era, the kitchens were quite small, dark and set back,” says Kareena. “In one of our projects, we had the opportunity to combine two living rooms into a large pantry, kitchen and family room with an addition in the back. The cabinetry has been carefully designed to mimic the built-in furniture, as would have been the original aesthetic intent, and we have also incorporated hand painted flowers on the refinished floor to retain and further extend the character of the renovation.

“Not all clients want to add so much charm, and there is a way to nod to the past while incorporating modern elements.

“Alair emphasized iron railings in favor of heavy balusters and newel posts. These are sleek in design and really bring a new approach to stair railings. To balance out the modern design, consider keeping or including crown molding in the stairwell. It’s all in the details and knowing how to modernize in an authentic and thoughtful way to respect the history and character of the house.

What to Look for in a Foursquare American Home

“The name ‘Foursquare’ comes not only from the generally cubic massing, but also from the floor plan, which typically includes four rooms – one per corner,” Christina explains. “This could include three square rooms – a living room, a dining room and a kitchen – on the ground floor in three corners, with a stair hall on the fourth and discreetly hidden stairs to the side.

“The upper floor could hold three bedrooms and a bathroom in the corner, although sometimes a bathroom was wedged next to the stairwell on the ground floor or between two bedrooms, freeing up space. space for a fourth bedroom. While some houses were designed with a central entrance and hallway, such a plan used space less economically than those with the stairs to the side.

“Buyers should look for the cozy porch, spacious entry stair hall, and fireplaces. Foursquares that are minimally altered have hardwood floors and fine woodwork, including window and door frames, paneled doors, turned stair posts and balusters, and wainscoting. They may have leaded glass windows and built-in wardrobes, which were common in early 20th century residential construction.