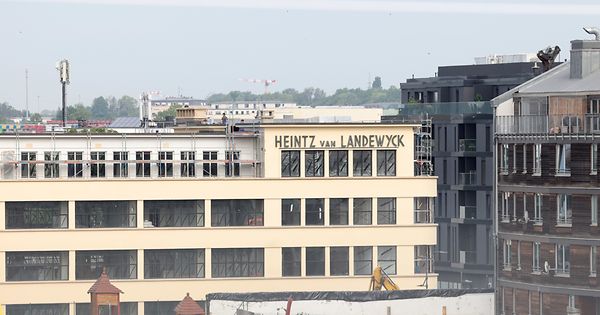 A former tobacco factory will be the heart of a new development in Hollerich that includes housing, shops and restaurants

A former tobacco factory will be the heart of a new development in Hollerich that includes housing, shops and restaurants

The former production site of tobacco company Heintz van Landewyck, with its striking yellow facade along Rue de Hollerich near Luxembourg’s central station, is being redeveloped into a residential and commercial center.

Around 20 hectares of land, stretching the full length of the street from Place de la Gare to Route d’Esch, will house 6,000 people over the next 17 years and create around 5,500 jobs, said its donors.

The factory is a National Historic Landmark built in the 1930s by George Strauss in the Bauhaus architectural style of the time. The Bauhaus is characterized by flat roofs, functional design and the use of steel, glass and concrete. The Heintz van Landewyck building, for example, has a steel frame covered in concrete.

The building as it once was.

The new layout will retain the yellow exterior, parts of the interior and the original 1937 tiles and pillars. The original window sills will be reproduced.

“We want to stay as close to the original as possible and bring the charm of the past into the modern era,” said Jürgen Primm, managing director of developer Landimmo.

Cigarettes were still produced on site until two years ago when the company moved to Diekirch. About half of the 5,500 square meter building is now leased, mostly to financial firms on long-term contracts of six to nine years, Primm said.

Other van Landewyck buildings are currently rented and will be integrated later into the development.

The roads will be redeveloped in the district, making way for the tramway and modifying the traffic lanes.

Along Rue de Hollerich is Landewyck Park, which former factory owner Joseph Heintz-Michaelis built in 1902 for his employees to meet and party. As part of the new urban plan, it will again become accessible to all. At the back of the park is a vault with an iron gate.

In the center of the park is a swimming pool that workers could use during the summer to cool off during their breaks or after work. It also served as a reservoir to draw water in case of fire. It is now deserted.

The construction of the SHED is approaching the home stretch | laughs