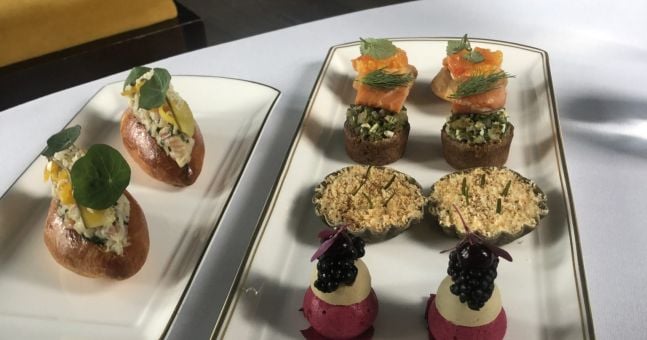 Why should you go there?

With harbor views, an interior rivaling Moulin Rouge decor, and bites to rival a Michelin-starred amuse-bouche offering, there are plenty of reasons to make a reservation.

With whom to book?

Someone you need to catch up on overdue with, or a close friend or family member you don’t mind spending time with to relax in each other’s company. It’s a great shout out for a pre-wedding break, Mother’s Day, or even a birthday present.

Such is its size, walking towards The Haddington feels like stepping into a Dún Laoghaire principality. The place spans numbers 9 to 12 of Haddington Terrace. As it overlooks the sea, there are a few feet between the crash of the pier pavements and Haddington House. While one wing hosts afternoon tea, the other houses the excellent Italian restaurant and bar Oliveto, the rest houses a 40-bed boutique hotel. There is amazing outdoor space in the walk-up, which is the perfect spot for some summer sunsets.

In 1954, several Victorian townhouses were restored and converted into a Kingston Hotel. In 2015, the people behind Oliveto took over the space and began an extensive renovation, which involved repositioning the layout. The name is a nod to the college-finishing ladies who once lived in space and were called “Haddington House.”

The interior is part Wes Anderson film set and part Moulin Rouge. It’s lux, polished and mid-century in the finish, with some incredible flashes of quirkiness. Sometimes an environment like this can make guests a little nervous with all the antiques and peacock feathers, but it’s a truly relaxing place.

Too often, afternoon tea food can be woefully disappointing. Chefs sometimes adopt a pastiche of what they think belong in tiered plates and create things like crustless cucumber sandwiches, profiteroles and overly creamy scones that could knock you out with a slight bend of your arm. That’s what makes this afternoon tea at The Haddington House so special, you can tell it was created by someone who understands what people really want for tea, who realizes that we want a lot more than an afternoon. The food comes in three stages, the savory plates are small bites with lots of local ingredients which I think rivaled Chapter One’s amuse bouche selection. The second is a shortbread scone with cream and jam, the third a trio of desserts, each more unctuous than the other.

Afternoon tea starts with champagne, granny and I weren’t drinkers so we opted for a glass of non-alcoholic champagne called Kallonne which was one of the best non-alcoholic bubbles I’ve had in a long time . Along with the scones came the tea, which came off and strained into a porcelain cup. There were some really interesting tea options available, from Cherry Queen to Apple Crumble.

Although the food is hard to match, the atmosphere was probably the highlight for me. It is a calming place, where one could very easily spend several hours admiring the view, the decor and chatting lazily. You come out with an overwhelming rest and serenity, much like the feeling you get when you come out of a spa treatment.

The service was excellent, attentive, extremely friendly and natural. My grandmother who is 90 years old was extremely well received and cared for.

There is wheelchair access through one of the entrances, there are a few steps in the main entrance. My grandmother was fine getting in and out, and there were staff on hand to hold the doors open.

There are vegan options available, in addition to reusable napkins and menus, the menu also contains many locally sourced ingredients.

Warning: a trip to Haddington House will probably make you want to book a hotel stay and a reservation at Oliveto.

Where is it again?

READ NEXT: Art Tea at the Merrion Hotel