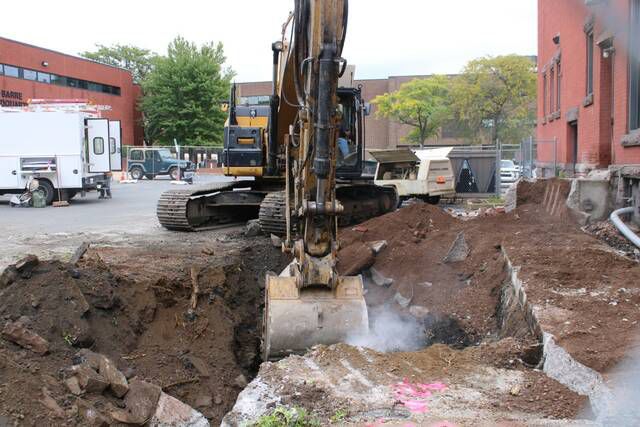 WILKES-BARRE – Work on a new project to add an elevator and staircase to town hall began on Wednesday.

The excavator demolished the Americans with Disabilities Act slope and the building’s back entrance, digging into the parking lot in front of the police headquarters on North Washington Street.

The new elevator replaces the elevator, which often breaks down due to aging, and provides more reliable access to the 4th floor of the Town Hall.

According to Mayor George Brown, the four-story extension will be separated from Town Hall more than 100 years ago, with stairs and landings on each floor.

Last year, city council approved an amendment to the $ 52 million bond transaction so that the remaining $ 4.4 million of the $ 4.4 million earmarked for rebuilding the creek wall can be used for capital projects. As a result, around $ 1 million has been made available for projects such as elevators and stair towers.

Butch Frati, the city’s chief executive and deputy mayor, said the project is expected to last six months if elevator materials and parts are available.

Elevators and stairwells serve all four floors and meet ADA and health and safety standards. ADA accessibility will be on the ground floor. A temporary ADA lamp was built at the entrance to North Washington Street.

The new additions also include stone swords on the windows and exterior brickwork to match the historic features of the Town Hall built in the 1890s.

In 2019, the exterior fire escape was deemed unsafe and was removed by the contractor.

Existing elevators have repeatedly failed due to their aging. He was over 100 years old and finding spare parts was difficult and expensive.

In a single outage that lasted for weeks last year, Brown moved his management office to the South Main Street Innovation Center instead of climbing four steps to reach people. Likewise, the city council held a public meeting at the center due to accessibility issues until the elevator was repaired.

Existing elevators are classified as service elevators, according to Brown.